Table from the sea's edge

Table from the sea's edge
Summers Place Auctions to sell
A Table From The Sea's EdgeTable and chairs devised by Silas Birtwistle to raise awareness for environmental issues
of the world's coastal biodiversity for UN meeting Summers Place Auctions will be selling a unique table, which helped raise awareness for environmental issues among some of the most influential politicians, environmental campaigners and showbiz greats. The Garden, Design & Natural History Sale on Tuesday, 23rd June 2015 will also include a wide range of mainly contemporary design highlights, sculptures and taxidermy. Silas Birtwistle's table is undoubtedly a first for the auction house, and should appeal to anyone with an interest in the environment, politics and contemporary design.

A Table From The Sea's Edge is an art project, devised by Silas Birtwistle to raise awareness of environmental issues and to promote conservation of the world's coastal and marine biodiversity. It was the artist's contribution to the UN International Year of Biological Diversity in 2010 and he will give a percentage of the sale to the TIDE charity, based in Belize (see notes), one of the four areas where he collected the driftwood for this project. Others include Vancouver Island, Canada; Tanzania and Borneo, Malaysia.

Silas Birtwistle says: “It was my aim to embody the rich biodiversity of nature by crafting a large conference table surrounded by twelve chairs, made entirely from beautiful examples of driftwood - collected from four key hotspots around the world. It is a dramatic statement on the environment, uniting different cultures and coastal communities, connecting land with sea, and symbolizing the boundary between marine and terrestrial ecosystems, making connections between man's land-based activities and the marine and coastal environment.”

Unveiled in Nagoya, Japan in October 2010 during the Convention on Biological Diversity, it provided the platform for a multitude of high-level UN debates on environmental issues and ceremonial signings of agreements. It has since been used at The World Economic Forum at Davos, Switzerland in 2011, and exhibited at The SouthBank Centre, Liverpool's The World Museum and most recently at The National Maritime Museum in Greenwich. As a result, the twelve individually-designed chairs can claim to have been sat on by some of the best-known politicians, environmentalists and celebrities from the film and music business. Whether you'd vote for Boris (Johnson) or Tony (Blair), both have enjoyed the comfort of these environmentally-friendly chairs, which have also been admired by Harrison Ford, Bono, Ban Ki-moon and other key players in the UN, WWF, Greenpeace and
the IMF. Surely, this should ensure that the buyer will never run out of dinner table conversation.

The table would look great in a boardroom of any business with environmental consciousness, but it could easily make its way into a private home. As much as it would make the perfect dining table for a celebrity's secret hideaway on an exotic island or
adding rustic charm to a baronial hall, not everyone has got the space for a table with the dimensions of 5.5 m by 1.2 m (each individual table is 234cms/96ins long). To give owners of more moderate homes a chance, Summers Place Auctions will be offering the table and chairs as two lots of six chairs and a table, with an estimate of £10,000-15,000 each. As a percentage of the sale will go to charity though, the complete set of the twelve chairs and both tables with the centre section will be offered as one lot as well and whichever bid is higher will get this unique piece of sculptural furniture.

James Rylands, the auctioneer of the sale, comments: “Summers Place Auctions have recently made a name for themselves selling unique objects like a Diplodocus and a Mammoth. As such we have established ourselves not only as leading experts in garden statuary, but also natural history. When art brokers Corfield Morris approached us on behalf of their client Silas Birtwistle to auction the table and chairs, we felt it combined both areas beautifully – sculptural design and historically important elements of nature .”

Viewing times: Sunday, 21st and Monday, 22nd June from 10am to 4pm and on the morning of the sale, or by appointment at Summers Place Auctions, The Walled Garden, Billingshurst, West Sussex, RH14 9AB. The catalogue will be available a month before the sale and will be fully illustrated on the website.

For further information on the auction, please visit
www.summersplaceauctions.com or call 01403 331331. For press information,
images or to interview Silas Birtwistle or any of the specialists, please contact
Silke Lohmann (silke@exclamationpr.co.uk/ 07932 618754).

Notes to editors:
Silas Birtwistle was born in Shaftesbury, Dorset, in 1963. He was brought up on the Isle of Skye,
Scotland. He has an MA in Furniture Design and started making furniture in the 1990’s and soon after,
exclusively with driftwood. The inspiration behind this was from a friend , minimal artist Bob Law.
Driftwood is by nature very quirky, so Silas's intention is not to make the matter more outrageous, but rather
find pieces that have classical proportions and turn them into elegant and beautifully made sculptures.
The journeys made are an important part of what Silas does - the walks, the landscape and the revisiting of
locations. A table From The Sea's Edge was an ambitious dream to make a large table with chairs made from
driftwood collected from the four corners of the world, giving it a potent identity within an environmental
context symbolic of the boundary between land and sea. He now lives and works in London.
Silasbirtwistle.com and atablefromtheseasedge.com

The Toledo Institute of Development and Environment (TIDE) is working with communities to promote
sustainable use and management of the area’s rich resources, from the peaks of the highest forest ridges to
the coral reefs of the ocean floor. The money raised will go towards the ranger station in the Port of
Honduras Marine Reserve to help save it from erosion. Tidebelize.org
Summers Place Auctions are the world's leading auctioneers of Garden Statuary and fossil decoration.
The sales are held in the new, award-winning 5000sq ft gallery nestling within 6 acres of walled gardens and
the arboretum of the Victorian mansion, Summers Place. They have four sales a year – three selling all to do
with the garden, design and Natural History, while their November Evolution sale focuses entirely on the
latter.

Corfield Morris is an international market leader providing professional, impartial advice to clients on every aspect of sourcing, buying, selling and maintaining fine and decorative art and jewellery. 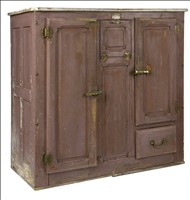 Taxidermy: A magnificently appointed and highly ...
Sold for £8,000