This June sees Summers Place Auctions' first auction with a focus on Tribal Art & Travel take place on the 13th & 14th June 2017. The Billingshurst-based auctioneers have been leading auctioneers in the field of Garden Statuary and Sculpture for over a decade and with their first Evolution Sale in 2013 also established themselves as leaders in Natural History. 2017 sees them start a new series of sales with a special focus on Tribal Art and Travel in June.

Rupert van der Werff says: “We have been including some tribal art and travel related items in several of our past sales, but having realised that they are quite popular with our regular buyers, we thought we make a bit more of a feature of it. This is the ideal auction for a first time buyer in this area as they are not just decorative, but many lots are very affordable at estimates under £500.”

Tribal Art's influence on Modern Art is undeniable – many of the Masters of Modern Art, like Matisse and Picasso had been influenced by African masks and sculptures. They were inspired by the often abstract forms of human faces and translated them into portraits on paper.

Today, Tribal Art is particularly popular because it works so well with modern and contemporary art and interior design. Among the highlights of this sale is the collection of 56 lots. They were collected in the Sepik river area of Papua New Guinea during the middle of the 20th Century by repute by a missionary who was stationed there both before and after the Second World War.

The Sepik River is the longest in Papua New Guinea and its course traverses numerous different terrains. There are numerous isolated villages throughout its course and over 120 languages developed through time. The various tribes all venerated the crocodile and produced wood carvings, masks and canoe prows of varying forms making accurate attributions difficult. This area still remains a difficult place to access and the traditional way of life continues largely unchanged to this day.

Highlights from the collection are an almost one metre high carved wooden ancestor figure on stand and sold together with an ancestor head, which is estimated at £300-500. Two figural hooks masks on stands are estimated to fetch £200-300 and another carved wooden figure with a height of 114 cm is expected to sell for £200-300. Two painted wooden carved heads, each almost one metre high, are estimated at £300-500 and a canoe shield of rattan and palm leaf construction (over one metre high) carries an estimate of £300-500. Reminding you of Picasso ceramics, are two lots of seven Aibom village painted terracotta Sago pots (the largest 30cm) – each estimated to sell for £200-300. A carved and painted wooden crocodile mask carries an estimate of £250-400.

Other tribal art highlights are an Amazonian paddle of 131cm.length, which is expected to fetch £300-500 and a Southern African Crane decoy from the early 20th century (est. £200-300). A wooden animal head mounted with embossed copper decoration and hung with cowrie shells and glass beads from West Africa is an impressive 166cm high and carries an estimate of £600-800.

A pair of beaded and buckskin moccasins from the Sioux Tribe, South Dakota, from circa 1870 is the highlight of tribal art from the Americas. They are estimated to fetch £1000-1500. Also covering this region is a rare carved white marble group of North American Indians from the late 19th century. The sculpture is 127cm high and depicts the fictional characters of Hiawatha and Minnehaha, who had been immortalised in “The Song of Hiawatha” an 1855 epic poem by Henry Wadsworth Longfellow. The epic relates the adventures of an Ojibwe warrior named Hiawatha and the tragedy of his love for Minnehaha. Longfellow’s poem, though based on native oral traditions surrounding the figure of Manabozho, represents an original work of American Romantic literature. In Europe there was a great interest in the concept of “The noble savage”, resulting in often idealised images and sculptures of North American Indians. This group is estimated to sell for £20,000-30,000.

Covering the Far East are a pair of rare and impressive life size carved hardstone flowering shrubs. They are early 20th century Chinese and the flowers and buds are made of rose quartz with jadeite leaves with simulated bark and in lacquered wood hexagonal tubs painted with oriental scenes. An impressive 221cm high by 175cm wide, these type of decorative trees in hardstone, were popular in the late 19th and early 20th century, when both Chinese and Japanese decoration were very much in fashion, both in areas of collecting and interior decoration. The majority of hardstone trees are miniature in scale and these life size examples are both a tour de force in terms of carving in a wide variety of hardstones and in their monumental scale which marks them as very rare examples indeed and carry an estimate of £10,000-15,000.

A pair of rare Japanese bronze cranes from the Meiji Period (1868-1912), each supporting candelabra and standing n stylised terrapins were very popular in Europe after the Universal Exhibition in London in 1862. Unusually, this pair also stand on mythical turtles and are extremely good castings with each feather individually delineated and are estimated at £10,000-15,000.

An unusual and rare Japanese style tea house from the early 20th century from Cowbridge House, Near Malmesbury, Wiltshire is expected to fetch £15,000-30,000. The estate was bought in 1899 by the grandly named Baldomero Hyacinth de Bertodano y Lopez, Marques del Moral, a partner in a firm of London solicitors, Hudson Matthews, Lopez and Coupland, and it was he who was almost certainly responsible for the construction of the teahouse. Japanese Gardens have intrigued and stimulated the West since the Portuguese and Spanish first visited Japan in the mid 16th Century. In 1639, however Japan expelled all foreigners and apart from a small amount of trade with the Dutch East India Company, Japan remained in its self imposed isolation for over 200 years until an American commodore, Matthew Perry, forced consular relations in 1854.

Among the Natural History lots the following are particularly noteworthy: A very rare Pygmy Hippopotamus head (Cheoropsis liberiensis) from the late 20th century is 99cm deep and estimated at £6000-8000, while a very rare Madani quality Lapis Lazuli freeform with a vein of pyrite running through carries an estimate of £3000-5000. It is very unusual to find such a formation in Afghanistan and this example is 24cm high and weighs 6.8kg.

There are several remarkable lots within the Garden Statuary section:
A carved white marble figure of Jael holding a mallet and tent peg is expected to sell for £3000-5000. The Italian sculpture from circa 1900 is indistinctly signed and 87cm high. Jael is Heber's wife mentioned in the Book of Judges in the Hebrew Bible, as the heroine who killed Sisera to deliver Israel from the troops of King Jabin by welcoming him in her tent and as he was thirsty, she gave him a jug of milk. Exhausted, Sisera lay down and soon fell asleep. While he was sleeping, Jael took a mallet and drove a tent peg into his temple, killing him instantly.

A carved white marble figure of a maiden in medieval dress signed Shakespeare Wood, Roma, 1869. It's 175cm high and could originally be found at Ashby Folville Manor, Leicestershire until it was sold by Heathcote Ball & Co. on 15th March 1984. Shakespeare Wood was born in Belfast in 1827. He exhibited at the Royal Academy from 1868-1871. Work by him is in the Scottish National Gallery and Sydney museum. He died in Rome in 1886 and this work is estimated at £5000-8000.

Another carved white marble figure, this time of a shepherd girl and a sheep shares the same provenance. It is Italian and from circa 1900 signed A.Cipriani. It stands 120cm high and expected to fetch £4000-6000.

A pair of lead athletes late 19th century, but after the antique – each 112cm high and based on the originals in bronze, standing side by side as if at the beginning of a race were excavated from the Villa of the Papyri at Herculaneum and are now in the Naples Archaeological Museum. They are estimated at £3000-5000.

An extremely rare terracotta figure of Pan by the Compton Pottery is also included in the auction with an estimate of £4000-6000. The Compton Potters Art Guild was started by Mary Watts, the wife of G.F. Watts the Victorian allegorical painter near Godalming, Surrey in the late 19th century and this is an early 20th century example.

Garden furniture highlights are:
A rare Macauley and Wade Foundry Seasons pattern cast iron seat from the last quarter of the 19th century with diamond registration stamp and 190cm wide is estimated at £4000-6000. A similarly sized and dated pair of Coalbrookdale Passion Flower pattern seats are expected to fetch £10,000-15,000 and an extremely rare original bronzed Coalbrookdale cast iron occasional table from circa 1860 carries an estimate of £3000-5000.

Other interesting lots are:
A marble sarcophagus, which was made in Italy in the 18th century is over two metres long and the central panel is inscribed with five lines of Latin inscription which translates: “To the shades of the deceased. For Gaius Tutilius Rufinus the hunter. Titus Claudius Secundus built this for his well-deserving friend”. It was sold in the Ashby Folville Manor sale as well and originally belonged to William Ponsonby, 2nd Earl of Bessborough (1704-93), Parkstead House, Roehampton, Middlesex. It's assumed that the sacrophagus was carved to support the ancient lid which was in the possession of the Earls of Bessborough until its
sale to Henry Blundell, who bought it in the 1801 auction of the Bessborough Collection for his collection at Ince and it is now in the Merseyside County Museum in Liverpool. The sacrophagus is £5000-8000.

Kelly Wearstler's glass and brass “fractured” table, 112cm in diameter is estimated at £1500-2500. Wearstler is an American designer, who established a reputation as interior designer in California in the mid-1990s within the hotel industry and The New Yorker dubbed her “the presiding grande dame of West Coast interior design”. This table is created by layering sheets of shattered glass between sheets of clear and smoked glass.

A rare Lavochkin V-760 rocket from 1960 is 10.9 metres long and is a variation of the S-75 rocket series. It is a two stage rocket with the initial solid fuel booster being supplemented by a second stage liquid fuel engine that burnt for 22 seconds enabling the craft to reach altitudes of 66,000 feet with a range up to 22 miles. Variations of this rocket were famously used to shoot down Gary Powers U-2 spy plane in 1960 and were mistaken for ballistic missiles provoking the Cuban missile crisis in 1962. As icons of the Cold War these Soviet rockets played an important role in balancing the uneasy peace. It is estimates to fetch £8000-12,000. 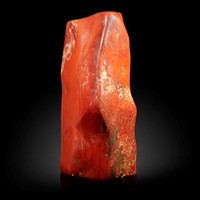 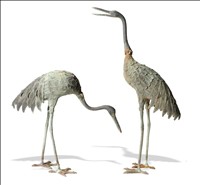