The first sale of a large dinosaur skeleton at auction in the UK will take place at Summers Place Auctions in Billingshurst, West Sussex on Wednesday, 27th November 2013 as part of their Evolution Sale.

The massive 17 metre specimen is a Diplodocus longus, one of the most iconic of dinosaurs and one of the largest animals ever to have walked on earth, some 150 million years ago. Relatively complete Diplodocus skeletons are extremely rare and this specimen joins only a handful of other known examples. Indeed such is it’s rarity that even the famous Diplodocus “Dippy” in the Natural History Museum, London, is a plaster copy taken from an original in the Carnegie Museum of Natural History in Pittsburgh, Pennsylvania, which was itself composed from at least two different fragmentary skeletons. This female Diplodocus, “Misty” as she has been nicknamed, carries an estimate of £400,000-600,000. Misty was found by the children of the celebrated dinosaur hunter Raimund Albersdoerfer near to the famous, privately owned Dana quarry in Wyoming and painstakingly prepped at a leading fossil laboratory in Holland before being assembled in the UK.

The Evolution sale is being curated by the renowned natural history expert and author Errol Fuller whose most recent book, co-authored with Sir David Attenborough and titled Drawn from Paradise charts the discovery and history of birds of paradise and the art associated with them. He has also long been intrigued by extinct species and written widely on the subject, including books on the Great Auk and the Dodo. Errol has considerable previous experience of curating exhibitions as well as researching and writing catalogues, which include the acclaimed Lost Worlds Exhibition in 2004 at The National Council for Culture, Arts and Heritage in Qatar, for His Excellency Sheikh Saud bin Mohammed Al-Thani. Closer to home, he is chairman of the Natural History vetting committees for many of the leading London Antiques Fairs including Olympia, LAPADA and Battersea Decorative.

This ground breaking auction entitled Evolution will include natural history in its broadest sense including dinosaur material, Dodo bones and a highly important Dodo pelvis, minerals, fossils and taxidermy, both antique and modern including works by Polly Morgan.

A truly remarkable 150 million year old fossil Ichthyosaurus (Ichthyosaurus communis ) from the Jurassic coast around Lyme Regis is also for sale for an estimate £50,000-80,000. This is the same species which was first discovered in 1811 also in Lyme Regis by the famous fossil collector, dealer, and palaeontologist Mary Anning who was one of the first to alert the scientific community to the hitherto unknown world of fossils and palaeontology.

Another highlight is a giant double ‘A’ grade lapis lazuli freeform from Afghanistan, which is 54 cm high and weighs 42 kg. The magnificently coloured stone is estimated at £8,000-£10,000.

As the title of the sale Evolution suggests there is also a number of modern sculptures including works by Steven Gregory and Guy Stevens which re-interpret both human and animal forms in an often minimalist contemporary style. Gregory's Midnight Rambler from 2008 a human skull with Russian jet, pearls and marble is estimated to fetch £20,000-30,000, while Jelly Fish by Stevens has an estimate of £3,000-4,000. 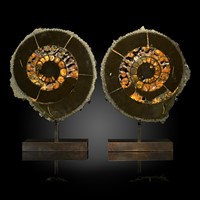