Evolution Sale includes important taxidermy
Taxidermy is a bit like Marmite, but there is no doubt that there is renewed interest in this craft, which had its heyday during the Victorian empire and lasted well into the early 20th century. Summers Place Auctions and the curator of the Evolution sale, Errol Fuller, have gone out to search for some of the best taxidermy of this period, which will be included in the second sale of its kind on Wednesday, 26th November 2014.

Ward, Spicer, Murray of Carnforth and Van Ingen are the big names in taxidermy and there are not just one of each of their creations included in the sale, but several by the masters.

A wonderful collection of 13 dioramas created by Peter Spicer (1839-1935) are perhaps the most desirable of all pieces taxidermy. Spicer was a very talented artist as well as a taxidermist and his watercolour backdrops and naturalistic imitation groundwork add to the attraction of the outstanding taxidermy. A particular favourite is a group of Woodland birds, which were created in the early 20th century and which is estimated at £1,200 – 1,800, but estimates range from an affordable £500 to £10,000.

Among the five Rowland Ward lots included in the sale, there are a couple of particular interest. One is undoubtedly “Charlie Boy” - a cased Mynah bird, who was something of a celebrity in his own right. He won many trophies and awards for his ability to speak about 20 sentences and imitate laughter, and dog barking. In 1959, he won the National Pets Club Silver challenge cup at the Nayional Exhibition of Cage Birds, Olympia and his proud south London owner kept several scrapbooks with photographs and details of his public appearances. After Charlie Boy's death his owner spent a substantial sum to have him prepared by Ward's company, which was still the leading company in taxidermy until they shut down in the 70's. The lot also includes photographs, scrapbooks and even trophies, and it is expected to fetch £3,000 – 5,000.

The other Ward highlight is one of his famous body illusion works - a cased half mounted tiger, which was one of the signature pieces of the by far most successful of all Victorian and Edwardian taxidermists who specialised in big game trophies, but also in
these stylish all glass cases, with the attention focused entirely on the specimen within. This one is estimated to sell in the region of £7,000 – 10,000 and is from circa 1890.

Display cases by Murray of Carnforth tend to be very rare and sought after and this sale includes five lots, which the rare and unusual bustards the jewel in the crown and estimated at £4,000 – 6,000.

A couple of Van Ingen's works can also be found in the sale, including a Leopard skin, which was reputed to have been shot by a hunter in 1940, who was helping local village people, but he was so effected by killing big cats, that he spent the rest of his life taking pictures of them instead with a keen interest in their conservation. This skin is expected to sell for £1,200 – 1,800. There is also a fabulous tiger head by Van Ingen included with an estimate of £ 4,000 – 6,000.

Errol Fuller, whose most recent book, Voodoo Salon, is covering the best in taxidermy over the centuries, says: “I am really excited about the taxidermy in this sale – I wish I had seen some of these pieces before I wrote my book. There are some really exceptional works included this year and it's a must see for anyone interested in taxidermy and its history. With prices still at a relatively affordable level, collectors should be able to pick up some key pieces for their collection."

The sale also includes the celebrated Sidney Imber Collection of butterflies, moths and other insects – the three lots included in the sale contain nearly 2000 specimen housesd in in stunning collectors' cabinets, bear witness to Sid Imber's absolute focus on perfect setting, totally comprehensive labelling and taxonomic order. The lots are estimated from £2,000 to £12,000.

Voodoo Salon has been published by Summers Place Auctions and is available to buy for £30 plus £5 (UK) post & packaging at www.summersplaceauctions.co.uk

Viewing dates: Friday 21st to Tuesday 25th November 10am to 4pm and on the morning of the sale,
or by appointment at Summers Place Auctions, The Walled Garden, Billingshurst, West Sussex, RH14 9AB.
The catalogue will be available a month before the sale and will be fully illustrated on the website.

For further information on the auction, please visit www.summersplaceauctions.com or call 01403 331331.
For press information, images or to interview any of the specialists, please contact Silke Lohmann (silke@exclamationpr.co.uk/ 07932 618754).

Notes to editors:
Summers Place Auctions are the world's leading auctioneers of Garden Statuary and fossil decoration. The sales are held in the new award winning 5000sq ft gallery nestling within 6 acres of walled gardens and the arboretum of the Victorian mansion, Summers Place. Their specialist sales of Sculpture and Design for the House and Garden in May and October include
examples of the finest garden ornaments. Regular Natural History sales are also taking place with the main sale in November.

Errol Fuller is the curator for the second Evolution sale. He was instrumental in setting up the first sale last year with the sale of 'Misty', the Diplodocus. Errol is a renowned natural history authority and author of several books on extinct species and birds of paradise, including a recent book, co-authored with Sir David Attenborough (Drawn from Paradise) and his latest book Voodoo Salon is an in-depth introduction to taxidermy. He has curated several exhibitions, including the acclaimed Lost Worlds
Exhibition in 2004 in Qatar. Errol is also chairman of the Natural History vetting committees of the leading London Antiques Fairs. 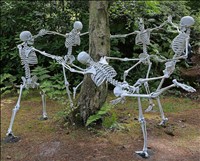