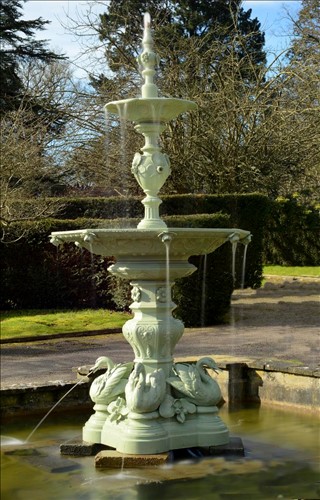 
Lot details
A rare and impressive Val dOsne cast iron fountain late 19th century 300cm.; 118ins high by 124cm.; 49ins wide The Val dOsne foundry was established by J.P.Andre in 1835 and based at the Val dOsne^ in the Haute-Marne region of France. Over the coming decades the company took over rival firms such as Barbezat^ J.J. Ducel and Durenne^ becoming far and away the largest manufacturer of cast iron in France. The company exhibited at the Great Exhibitions of 1851 and 1862 as well as the Chicago Great Exhibition of 1893. In 1889 the Societe Anonyme des Hauts Fourneaux and Fonderes du Val dOsne published a mammoth 3 volume catalogue of engravings illustrating thousands of cast iron pieces across a huge spectrum^ from railings and lamp posts to sculpture urns and fountains^ in which this fountain is illustrated on plate 542 (see engraving).