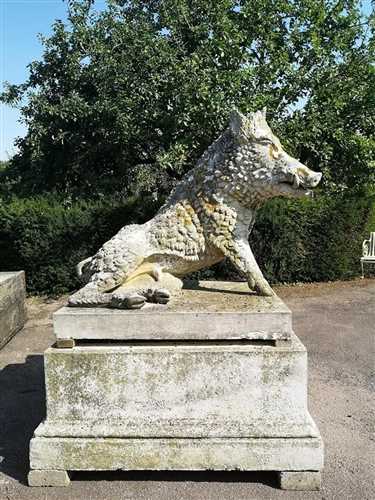 
Garden statues: After the Antique: A composition stone figure of the Uffizi boar

The Uffizi or Calydonian boar is also called “Il Porcinellino”. The Roman marble original was discovered in Rome in the 1550’s by the Ponti family. By 1568 the statue was in Florence and its fame began to spread. Originally the statue was grouped with other animals and a figure of a peasant or soldier assumed to be Meleager, however by the end of the 18th Century it was more commonly depicted by itself. The piece is presently located in the Uffizi museum in Florence. It has been reproduced in a large variety of materials including bronze, terracotta and composition stone.

Condition report
Nicely weathered with moss and lichen some small chips mainly around base of plinths but otherwise good condition. Please note there is a video commentary on this lot on our website.