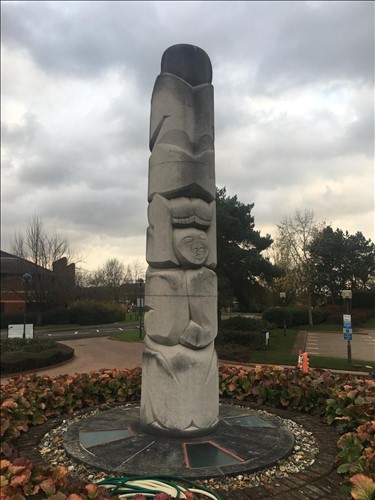 The Breath of Life

With inscribed pavement surround with glazed metal frames originally housing electric uplighters and a stone plaque with brass giving details of the sculpture.

This iconic sculpture, resembling a totem pole, was originally commissioned in 1962 for the forecourt of Hammersmith House, the London headquarters of the British Oxygen Company. Fittingly, the theme from the second Chapter of Genesis is carved into the circular pavement surround of the sculpture; ‘And the Lord God formed man of the dust of the ground and breathed into his nostrils, the breath of life; and man became a living soul.’

The simple tapering column of Nabresina marble, a form of limestone similar to Portland, has been carved and incised to form a group of three human figures. The lowest figure shows man in the foetal position, as though newly formed from the rock. Upon his bowed back crouches a second figure struggling to inhale the first breathe, wracked by the stresses of his awakening. He supports with his arms the topmost figure, who kneels upright with his face gazing up into the sky.

David Wynne OBE, (1926-2014) was one of Britain’s best loved sculptors of the 20th Century. Educated at Stowe School he then served in the Royal Navy during World War II and read Zoology at Trinity College, Cambridge, before taking up sculpture professionally in 1950.

In London alone, Wynne was responsible for a huge number of important public commissions. He carved one of the capital’s best-loved animal figures, Guy the Gorilla, in Crystal Palace Park (1961). He sculpted the iconic Boy with a Dolphin at the Chelsea end of Albert Bridge, (1974) and Girl with a Dolphin outside Tower Bridge. (1973). Elsewhere he sculpted the Tyne God fountain in Newcastle upon Tyne; (1968), Christ and Mary Magdalene at Ely Cathedral;(2000) and a Risen Christ for the front of Wells Cathedral, one of his most famous commissions. (1985)

His portraits included the Queen and the Prince of Wales, (1970) Sir John Gielgud,(1962), Sir Yehudi Menuhin,(1963), Sir Thomas Beecham (who said the piece reminded him of all the mistakes his orchestra had made in the previous 10 years),(1956), the four Beatles(1964) and the Maharishi Mahesh Yogi (whom he introduced to the group), as well as the Derby-winning racehorse Shergar.

In 1973 he designed the linked hands on the 50p pieces that marked Britain’s entry into the European Community. Some of Wynne’s most striking pieces were designed for garden settings. He created works for the Abbey Gardens at Tresco, including Gaia, a sculpture made from South African marble, which has a South African planting around it. The Prince of Wales was so taken by the figure he commissioned a similar piece, called Goddess of the Woods, for his gardens at Highgrove.

Wynne always took particular care in his choice of materials. A commission in 1957 for the façade of the Taylor Woodrow headquarters in London resulted in a distinctive 100ton block of granite being blasted from a Cornish quarry and being worked on in the rough in situ before being precariously transported to Wynne’s studio in Wimbledon. Likewise, when Pepsi Cola gave him carte blanche for a large piece, he spent three weeks in the Rocky Mountains and came out with a plan for a grizzly bear fashioned from a 36-ton block of marble.

Please see our website for further pictures and details.