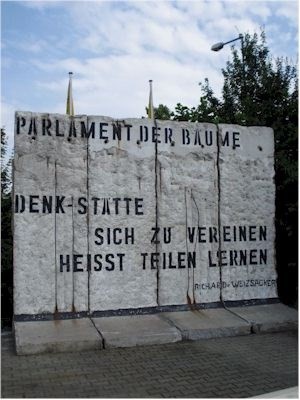 The Berlin Wall was a guarded concrete barrier that physically and ideologically divided Berlin from 1961 to 1989. Constructed by the German Democratic Republic (GDR, East Germany), starting on 13 August 1961, the Wall cut off by land West Berlin from virtually all of surrounding East Germany and East Berlin until government officials opened it in November 1989. Its demolition officially began on 13 June 1990 and finished in 1992.

More than 5,000 escape attempts were made trying to flee life behind the Iron Curtain. Then on November 9, 1989, the first sledgehammers pounded into the concrete to |tear down this wall|. It took 18 months to bulldoze the 140 km (87 mile) structure.

Most of the materials were crushed and recycled into roads. However, some sections were sold, auctioned off or donated as historically important objet d’arts.

A number of large scale installations from the Berlin wall may be seen as far away as the World Trade Centre in Montreal, donated to the city in 1992, to Seoul, South Korea, where a three section portion of the wall stands in Berlin Square. It was brought to Seoul in 2005 as a gift from the City of Berlin to inspire South Koreans to hope for a similar reunification with North Korea in the future.

Closer to home a single section stands outside the Imperial War Museum, London.

For a fuller description of 16 other historically important large scale sections of the Berlin Wall around the world and further photographs please see our website.

An historically important reinforced concrete portion of the Berlin Wall

(Parliament of Trees, To Unite Means to Learn to Share)

German artist and environmental activist Ben Wagin painted his powerful messages over these sections of the Wall in 1990 after initial visitors had chipped off the original graffiti - creating a uniquely textured surface. The effect is as dramatic as it is powerful. These sections were part of the memorial to the hundreds of people killed at the Wall trying to escape to freedom, called the Parliament of Trees, in the middle of Berlin opposite the Reichstag. These parts of the original memorial had to be removed to make room for additional constructions. The wall is covered with a quote by the German President at the time, Richard von Weizsäcker, who said: |To unite means to learn to share.| The reverse shows graffiti ‘Berlin November 1989’