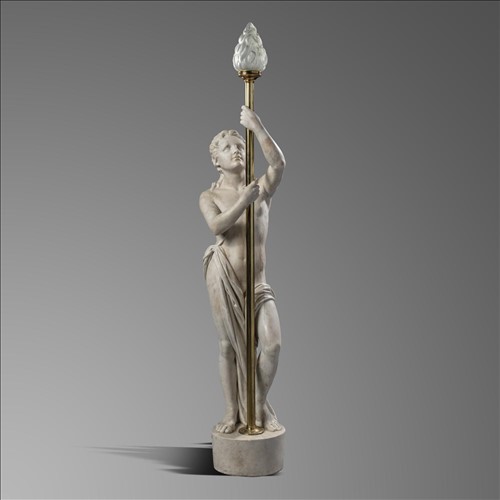 
Statuary: A carved marble figure of a youth supporting a light fitting

This marble sculptural light fitting was almost certainly commissioned by Emden for one of the theatres so popular in the late Victorian and Edwardian eras. It would most probably have stood on a pedestal flanking a staircase.

Walter Lawrence Emden (1847-1913) was one of the leading English theatre and music hall architects in the building boom of 1885 to 1915. Originally studying as a civil engineer, he joined architects Kelly and Lawes in 1870 in the burgeoning construction of theatres. He was immediately given the commission of designing the Globe Theatre. Emden also became a member of the Strand District Board of Works, a forerunner of local councils, and for seven years acted as chair. In 1890, he was elected to the London County Council.