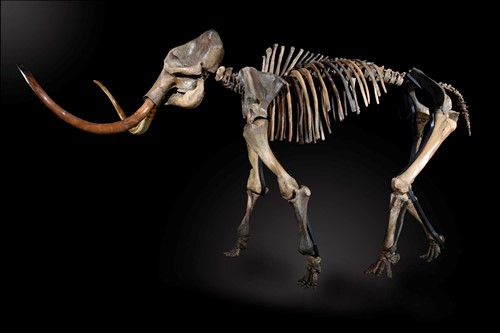 
Lot details
A rare ice age mammoth skeleton, 548cm.; 18ft high by 350cm.; 11ft 6ins long. The mammoth is one of the great icons of extinction and its bones are found across northern Europe and Asia from Siberia in the east to the UK in the west. Complete skeletons are rare although isolated teeth, bones and fragments of tusk are occasionally found. Sometimes such items are dredged up from the North Sea from areas that were once not submerged by the sea. Beautifully preserved tusks are highly prized and the ones on this particular specimen are in a wonderful state of preservation; the colour varies according to the exact nature of the minerals that leach into them during the process of fossilization. This example comes from eastern Europe and although the bones were found some time ago, it has only recently been articulated and mounted. The specimen is 90% complete with only a few small bones missing and these have been replaced with replicas. Many hours of painstaking work have gone into the preparation and mounting of this mammoth.