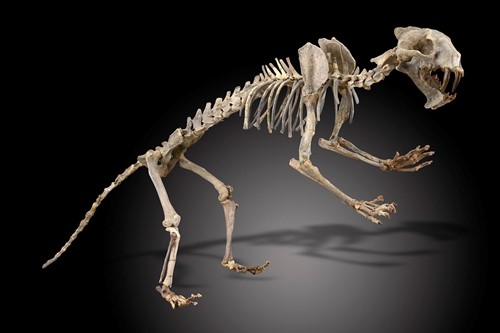 
Lot details
Fossil skeleton: A rare fossilised Sabre tooth cat^ probably Hoplophoneus primaevus North America^ late Eocene/early Oligocene 120cm.; 47ins long Provenance: Emmen Zoo Collection. See footnote to lot 1 for more information. Sabre toothed cats evolved over a considerable period of time and several different genus~ the principle ones being the Nimravids and the Smilodons^ producing 6 and three species respectively. Confusingly none were closely related to present day cats The most famous |Smilodon| or the sabre tooth tiger is now recognized as three different species each being termed sabre toothed cats and evolved much later in the Pleistocene (2.5 m.y.a. -10^000 years ago). The Nimravids were a much earlier genus of sabre tooth cats dating from the middle Eocene to late Miocene. They have now been classified in their own family the Barbourofelids. The Nimravids were first described by Edward Drinker Cope in 1880. It is believed the Nimravids were forest dwellers and probably lead similar lives to modern day leopards. Their disappearance from the fossil record follows the change in north America from forest to a more savanna like landscape^ the family surviving longest in Europe. Hoplophoneus was the largest toothed of the Nimravids and lived in North America between the late Eocene and early Oligocene. Its limbs were shorter than modern day cats and like the smilodons it had a pronounced flange on the lower jaw.