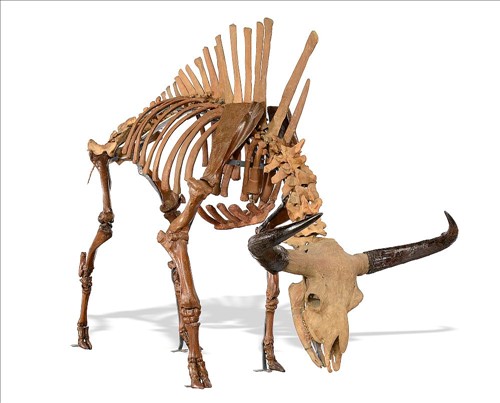 
Natural History: A rare skeleton of an Aurochs (Bos primigenius) 194cm high by 282cm long, horn spread 118cm The skeleton is a rare example of the Aurochs^ the legendary ancestral bull that was found in Europe and Asia until well into historical times. In fact the last known aurochs was killed in a central European forest in 1627. This creature of legend was the ancestor of our cattle today^ and it is no small testament to human ingenuity that this enormous and ferocious beast was tamed and eventually domesticated. Hunted and yet feared by prehistoric and medieval man^ its famed ferocity filled several leading Nazis (most notably Hermann Goering) with the wish to recreate it. Inspired by myths of former Teutonic glory^ their aim was to stock ancient European forests with this formidable beast so that they could test their hunting skills against it. This strongly held fantasy they hoped to bring about through selective breeding^ but although much money and effort was spent on the project it was doomed to ultimate failure and the Aurochs remained - and remains - a creature of history. The aurochs roamed widely over Europe and into Siberia its range overlapping that of the steppe bison (Bison priscus) and it has been noted that the two species could hybridise. Indeed their skeletons are very similar in appearance and size. Location seems to be the main determinants as to which species is recognised. In Western Europe it is the aurochs (Bos primigenius) and in former Soviet territories the bison that seems to be more commonly identified. This slightly confusing state of affairs adds to the mystery of this skeleton^ as it is either a large bison or a medium aurochs. The attitude and size of the horns leans more towards the aurochs than the steppe bison. There are perhaps less than two dozen reasonably complete aurochs skeletons so the body of evidence is not large. The best two of these were found in peat bogs in Denmark. It is quite surprising that so little has survived from such a large beast that died out relatively recently. The name and fame have survived and one wonders why there are not more trophies in castles^ particularly in Poland and Germany where they last lived. The awesome skeleton at Summers Place shows the fearsome power and size of this now legendary beast.