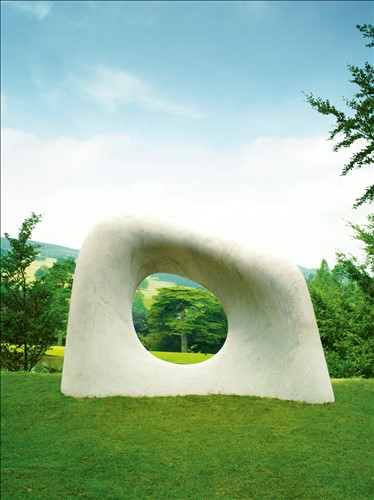 
†▲Kan Yasuda, Myomu (Key to a Dream), White carrara marble, 233cm.; 91½ins by 320cm.; 126ins by 90cm.; 35½ins. Provenance:, Acquired from the artist by the present owner. Beyond Limits: Sotheby’s at Chatsworth- A Private Sale Offering , Kan Yasuda was born in the city of Bibai on Japan’s northern-most island Hobbaido. After completing a master’s degree in sculpture at the Tokyo National University of Fine Arts and Music, Yasuda left Japan for Italy in 1970. Upon the completion of his studies at the Academy of Fine Arts in Rome, he set up a studio in Pietrasanta, the northern Italian region famous for its marble quarries. Kan Yasuda’s works are created by a process of reduction; he gradually whittles away huge stones to achieve the soft, almost malleable surface of his finished sculptures. His work vacillates between the rounded forms and more geometric works, but behind all of his oeuvre is the desire to reveal the pure form within stone. The simplified shapes of this work exude a Zen-like air of calm and balance, and have been exhibited in public spaces around the world, most recently this year with “Kan Yasuda. Toccare il tempo”installed in Rome’s historic Trajan’s Market. Other examples of the present Myomu, with variations in size and finish, can be found in the main station at Sapporo (seen daily by 80,000 people); in the entrance hall of Jean Nouvel’s Dentsu building in Tokyo’s Shiodome district and at the station plaza in Pietrasanta. Two versions in bronze are installed in Benetton Group’s headquarters at the Villa Minelli in Treviso and in Tokyo’s midtown station.