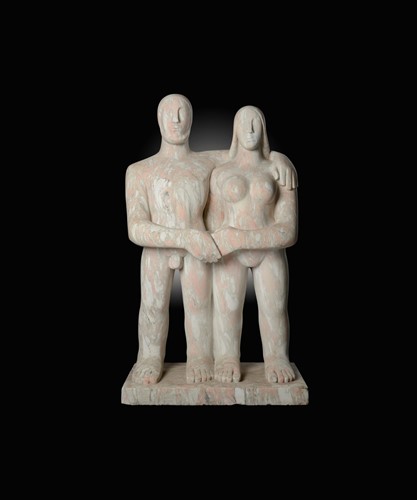 
▲ David Wynne born 1926 Lovers Norwegian rose marble 174cm.; 68½ins high by 104cm.; 41ins wide by132cm.; 52½ins deep David Wynne OBE 1926-2014 was one of Britain's best loved sculptors of the 20th Century. Educated at Stowe School he then served in the Royal Navy during World War II and read Zoology at Trinity College Cambridge before taking up sculpture professionally in 1950. In London alone Wynne was responsible for a huge number of important public commissions. He carved one of the capital's best-loved animal figures Guy the Gorilla in Crystal Palace Park (1961). He sculpted the iconic Boy with a Dolphin at the Chelsea end of Albert Bridge(1974) and Girl with a Dolphin outside Tower Bridge.(1973). Elsewhere he sculpted the Tyne God fountain in Newcastle upon Tyne; (1968) Christ and Mary Magdalene at Ely Cathedral;(2000) and a Risen Christ for the front of Wells Cathedral one of his most famous commissions.(1985) His portraits included the Queen and the Prince of Wales (1970) Sir John Gielgud(1962) Sir Yehudi Menuhin(1963) Sir Thomas Beecham (who said the piece reminded him of all the mistakes his orchestra had made in the previous 10 years)(1956) the four Beatles(1964) and the Maharishi Mahesh Yogi (whom he introduced to the group) as well as the Derby-winning racehorse Shergar. In 1973 he designed the linked hands on the 50p pieces that marked Britain's entry into the European Community. Some of Wynne's most striking pieces were designed for garden settings. He created works for the Abbey Gardens at Tresco including Gaia a sculpture made from South African marble which has a South African planting around it. The Prince of Wales was so taken by the figure he commissioned a similar piece called Goddess of the Woods for his gardens at Highgrove. Equally as versatile in bronze stone or marble this unique group of The Lovers fits into the earlier part of his oeuvre. He made the first maquettes I-IV for The Lovers in plaster and then bronze in 1964 before revisiting the idea in 1965 Maquette V and 1966 with maquettes VI and the VII which was cast in bronze in an edition of 6. The cover of T. Boase's definitive book David Wynne's Sculpture 1949-1967 shows the plaster Lovers maquette VII with this Norwegian rose marble group in an unfinished state in Wynne's studio. (see picture). Wynne always took particular care in his choice of materials. A commission in 1957 for the façade of the Taylor Woodrow headquarters in London resulted in a distinctive 100 ton block of granite being blasted from a Cornish quarry and being worked on in the rough in situ before being precariously transported to Wynne's studio in Wimbledon. Likewise when Pepsi Cola gave him carte blanche for a large piece he spent three weeks in the Rocky Mountains and came out with a plan for a grizzly bear fashioned from a 36-ton block of marble. The beautifully variegated colours of this Norwegian Rose marble act as the perfect counterpoint to the simplicity of line in the piece whilst on a more simplistic level the soft glowing pink of the marble demonstrates the colour of love. The group was finally finished in 1970 and shipped to its new home in Chicago Illinois. Provenance: Christie's New York 11th July 2006 lot 219 Literature: David Wynne's Sculpture 1949-1967 T.S.R. Boase Michael Joseph 1968 front cover and page 147. The Sculpture of David Wynne 1968-1974 Phaidon Press 1974 including 14 pages of illustrations of this group. |The lovers stand side by side their arms about each other gazing in awe at a world made new by love. Washed of all thought they seem like innocent travellers from a far off land. The dappled colours flow from one figure to the other and down the trunk-like legs into the ground.|