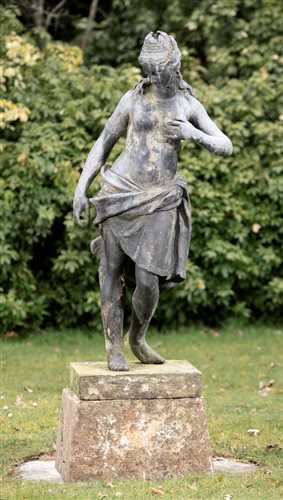 
Garden statues: A rare lead figure of Leda and the swan possibly by John Van Nost

on stone base and later plinth

Although it isn’t possible to make a positive attribution, this rare lead figure of Leda and the swan was produced by one of the leading producers of lead in the late 17th/early 18th century. Much of the lead sculpture of the time drew on the classics and this depicts Leda who was the daughter of the Aetolian King Thestius and was seduced by Zeus when the king of the Olympian gods took the form of a swan. The result of this union, which occurred on the banks of the River Eurotas, was an egg from which the beautiful Helen and Polydeuces were born. Leda is depicted wearing a crown as befitting her status as a princess, whilst the partial figure of the swan can be seen at the back of the piece.

Stylistically it is reminiscent of the van Nost family who were of Flemish descent. The eldest, John van Nost, is first recorded working at Windsor Castle circa 1678. He had his own yard by about 1687 and there manufactured ‘Marble and Leaden figures, Busto’s and noble Vases, Marble chimney pieces and curious Marble tables’. He is best remembered as a supplier of lead garden statues. Records from Melbourne Hall, Derbyshire show that each of the supplied statues cost between £20-30. After his death (circa 1712) his yard at Hyde Park Corner was taken over by his nephew Gerard and then by John van Nost the younger in 1729 who continued until the mid 18th century.