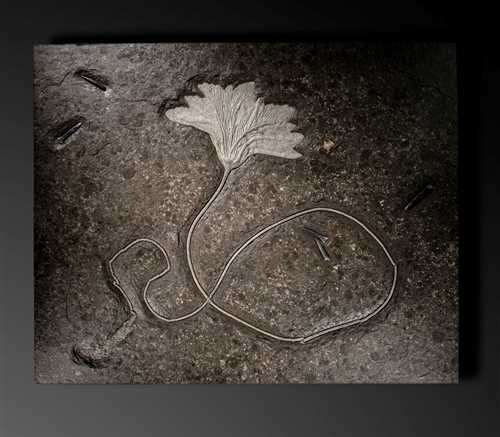 The Jurassic deposits at Holzmaden in southern Germany have long been known for the exceptional preservation of its fossils.

Among the most sought-after are the perfectly detailed examples of crinoids - creatures that are sometimes called sea lilies. Not only are these wonderfully preserved and detailed fossils, they also sometimes make the most spectacularly decorative shapes. The present example perfectly illustrates this. However, such fossils are not actually found with their magic exposed. Although the form is perfectly natural and has not been tampered with, it takes hours and hours of expert preparation to reveal the magical beauty. Layer after layer of rock must be drilled away before the shape that has been hidden in the rock for millions of years is laid bare and revealed in all its splendour.

During this whole process there is little room for error and it requires enormous skill and a great deal of patience. The decorative beauty of this particularly wonderful example is enhanced by the presence of two belemnites which were fossilized along with the crinoid.