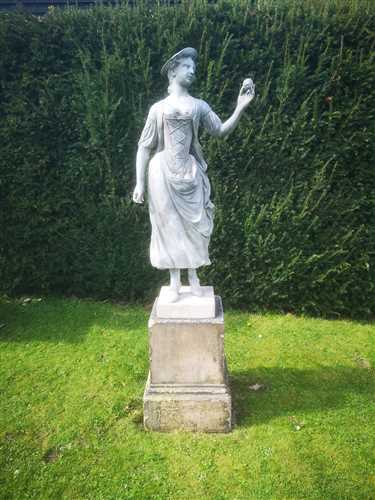 on later stone base and on stoneware pedestal

John Cheere was first in partnership with his brother Sir Henry Cheere, but took over John Nost’s yard and his moulds for lead figures in about 1739.

Until his death in 1787 he was the leading producer of lead statuary as well as working in plaster. Contemporary accounts of his yard, which was situated on Hyde Park Corner indicate that his oeuvre was very varied and included rustic figures as well as classical statues and busts from antiquity.

During the 18th century, masked balls or fete champetres set in Arcadian settings of country houses or in London’s Ranelagh and Vauxhall pleasure gardens, were immensely popular. These were attended by fashionable society dressed as milkmaids, fruit and flower girls or in the costume of the commedia dell’arte.

This fascination with Arcadia was reflected in many art forms - for instance porcelain figures, but also in lead statuary in which numerous models were produced. Unlike porcelain however, the depredations of the weather and the intrinsic value of the material have resulted in very few period lead figures from the 18th century surviving.