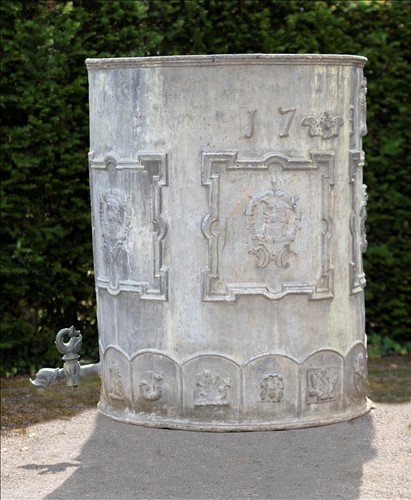 dated 1774 and initial ID with coat of arms, signs of the Zodiac, armorials and renaissance style romaine heads and with dolphin bronze tap, now with later internal overflow pipe

Circular lead cisterns are extremely rare compared to the more usual rectangular examples, which were made to be located against a wall often in an internal courtyard where they were connected to downpipes collecting water from the house’s roof. They were usually decorated on the front and sides and usually incorporate a bronze tap. Perhaps the most well-known circular example was made for the Earl of Plymouth at St Fagin’s Castle, Cardiff and is dated 1620 which is located on a stepped stone base between the main entrance to the Castle and the drive.

This example with an elaborate bronze stylised dolphin tap would have been cast in a flat sand bed. The different elements of decoration would be in the form of carved wooden panels and wooden mouldings which would be pressed into the sand before the lead was poured. In many of the smaller individual panels of this cistern, there is the faint square outline of the edges of the wooden panel where it has been pressed into the sand. The moulded panels containing relief heads are typical of Renaissance and later decoration in panelled rooms. Once the lead had cooled after pouring, it would have been curved into a circle before the base was applied forming a cylinder. The coat of arms centred with the red hand of Ulster is probably that of the Chetwynd family.