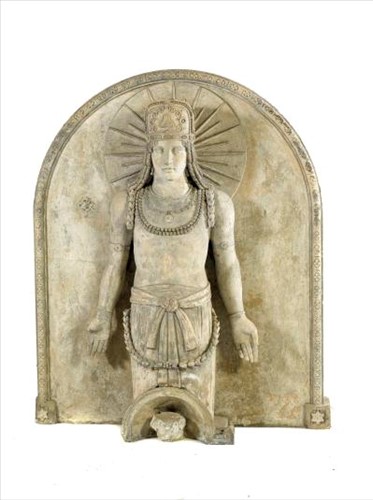 
An extremely rare Coadestone torso of the Indian goddess Soraya, early 19th century,108cm.; 42½ins high by 95cm.; 37ins wide, This rare Coade stone relief is identical to one at Sezincote, Gloucestershire. Unusually, the house was built in the Indian Mogul style by Charles Cockerel, who had served in the East India Company and was created a baronet in 1809. He employed his brother, Samuel Pepys Cockerel as the architect. The Coade manufactory also supplied models of Bulls and Elephants, of which the bulls and the plaque remain. A stream meanders through the grounds, and where it begins as a spring, the water has been dammed into a pool at the back of which rise steps to a high relief panel, depicting the Indian sun goddess Suraya in a niche. Thomas Daniell, the topographical artist who specialised in Indian scenes, helped Cockerel with the house and could have provided the design for Suraya. , Sir Charles was given an estimate of £27 in November 1813 by Coade for a fountain, which is almost certainly the Suraya panel. What is unclear is why a second example was made, although it is likely that a client, having seen the original at Sezincote, commissioned Coade to make another., Eleanor Coade (d.1821) opened her Lambeth Manufactory for ceramic artificial stone in 1769, and appointed the sculptor John Bacon as its manager two years later. She was employed by all the leading late 18th Century architects. From about 1777 she began her engraved designs, which were published in 1784 in a catalogue of over 700 items entitled A Descriptive Catalogue of Coade’s Artificial Stone Manufactory. Then in 1799, the year she entered into partnership with her cousin John Sealy, she issued a handbook of her Pedlar’s Lane exhibition Gallery. The firm became Coade and Sealey from this date and following Sealey’s death in 1813, it reverted to Coade and in 1821 with the death of the younger Eleanor Coade, control of the firm passed to William Croggan, who died in 1835, following bankruptcy. Coade’s manufactures resembling a fine-grained natural stone, have always been famed for their durability., Literature: Mrs Coade’s Stone, by Alison Kelly, SPA, 1990, pages 127,134,206 and 263