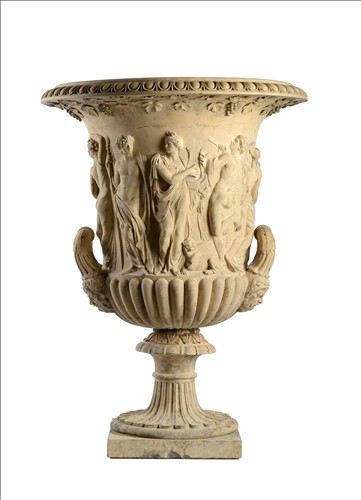 
Lot details
Garden Urn : After the Antique: A pair of rare and monumental Coade stone Medici and Borghese urns stamped Coade Lambeth one indistinctly dated 1815 on Portland stone pedestals 259cm.; 102ins high Eleanor Coade (d.1821) opened her Lambeth Manufactory for ceramic artificial stone in 1769 and appointed the sculptor John Bacon as its manager two years later. She was employed by all the leading late 18th Century architects. From about 1777 she began her engraved designs which were published in 1784 in a catalogue of over 700 items entitled A Descriptive Catalogue of Coade's Artificial Stone Manufactory. Then in 1799 the year she entered into partnership with her cousin John Sealy she issued a handbook of her Pedlar's Lane exhibition Gallery. The firm became Coade and Sealey from this date and following Sealey's death in 1813 it reverted to Coade and in 1821 with the death of the younger Eleanor Coade control of the firm passed to William Croggan who died in 1835 following bankruptcy. Coade's manufactures resembling a fine-grained natural stone have always been famed for their durability. The Medici and Borghese urns are illustrated in the 1784 Coade catalogue Nos 81 & 82. (see engraving). The Borghese Urn was recorded in the garden of Carlo Muti in 1594 by Flaminio Vacca who added that it had been discovered along with the Silenus and Infant Bacchus on Muti's estate near present day Casino Massimo. In 1645 the urn had found its way into the Villa Borghese where it stayed until purchased by Napoleon in 1807. By 1811 it was on display in the Louvre where it remains today. From the mid 17th to the late 19th Century the Medici and Borghese urns or |vases| were the most admired of all the antique models and were often paired together. The Medici urn is first recorded in 1598 in the inventory of the Villa Medici Rome although there is evidence that it was there at least thirty years earlier. In 1780 it was removed to Florence and soon entered the Uffizi where it remains today. It is believed that the original was executed in the second half of the first century A.D. Provenance: Newtown Park House Dublin Bought on 20th September 1976 at an auction held by Christie Manson & Woods Ltd. and Hamilton and Hamilton and thence by descent. A photocopy of the catalogue title page and photographs of the urns are available to the purchaser. For further information on Newtown Park House go to; http://www.newtownparkhouse.ie/about-us/history