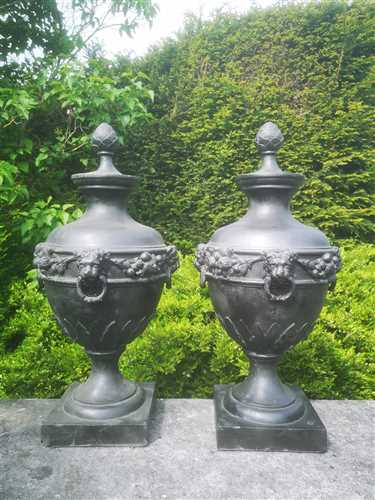 
Garden Ornament: Sold on behalf of The William Hogarth Trust

A pair of Jesmonite finials

These are copies of the lead originals given by the renowned Georgian actor David Garrick around 1750, to his great friend, the artist, William Hogarth, and used as gate pier finials at Hogarth’s country house in Chiswick. The Hogarths had bought a house with a walled garden which was originally an orchard and the ancient mulberry survives there today. Hogarth had not owned a garden before so the pine cone on top of the urns and their garlands of fruit and flowers rather appropriately symbolise its future fruitfulness.

Now open to the public, the original lead finials have been moved inside and two pairs only were made in Jesmonite, one pair of which are now on the gate piers at Hogarth's House, and this second pair, being sold on behalf of The William Hogarth Trust.