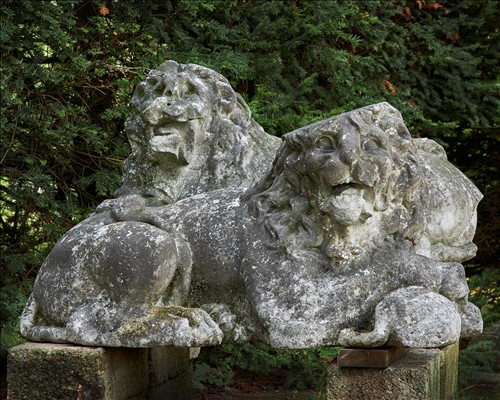 one with paws resting over a lamb

Provenance; By repute Woodbastwick Hall, Norfolk. The house dates back to circa 1600. In 1807 the house and estates were acquired for £76,000 from the trustees of Thomas Allday Kerrison by John Barwell Cator (nephew of John Cator), who became High Sheriff of Kent in 1818. It then passed down the Cator family. After a fire in 1819, Cator commissioned architect George Smith to rebuild the hall.

After another serious fire in December 1882, the house was substantially rebuilt to a design by Ewan Christian , and then used as a Red Cross auxiliary hospital during World War II and subsequently as an Agricultural Training College until it was demolished in 1971.