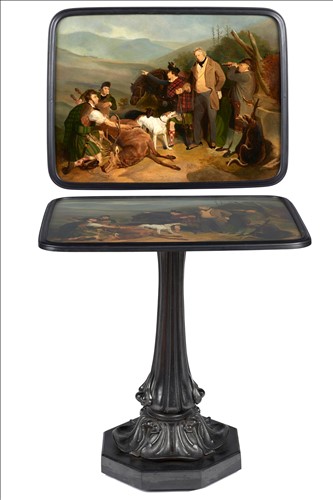 
Furniture: An extremely rare Coalbrookdale cast iron occasional table, circa 1850 with tilt top, the brass mechanism stamped Coalbrookdale Co. Shropshire, the top painted with a hunting scene and inscribed The death of a stag at Glen Tilt, on original castors, 70cm wide by 54cm deep. Sir Edwin Henry Landseer RA (7 March 1802 - 1 October 1873) was an English painter and sculptor, well known for his paintings of animals - particularly horses, dogs, and stags. However, his best known works are the lion sculptures in Trafalgar Square. In 1824, when he was 21, he visited Scotland for the first time, staying with Sir Walter Scott and later with the Duke of Atholl at Blair castle. He already knew something of Scotland from Sir Walter’s novels but on his first visit to Blair Atholl he fell in love with the Highlands. The grandeur of the scenery, the quaintness of the inhabitants (to his eyes) and the magnificence of the wild life, particularly the deer, all combined to excite and delight him. In addition, he enjoyed the outdoor pursuits of hunting, shooting and fishing and the company of the landed gentry who could indulge such pastimes. He executed a number of paintings of deer in the highlands, the most famous of which is Monarch in the Glen, painted in 1851. He had a certain tendency to leave his paintings unfinished until, in some cases, years later. For these reasons, it is sometimes difficult to date or even set a locality for some of them. There is no doubt that he painted a number of pictures in the Blair Atholl area which he visited in 1824 ‘25 and ‘26. His picture ‘Death of the Stag in Glen Tilt’ was painted especially for the Duke of Atholl and portrays the old Duke, his grandson, the Duke’s head keeper, John Crerar and his son Charles about to gralloch the dead stag. The furniture style of this extremely rare Coalbrookdale table, would suggest a date of around 1835-40, making it a very early example of the world famous foundry compared to the vast output in the latter half of the 19th century.