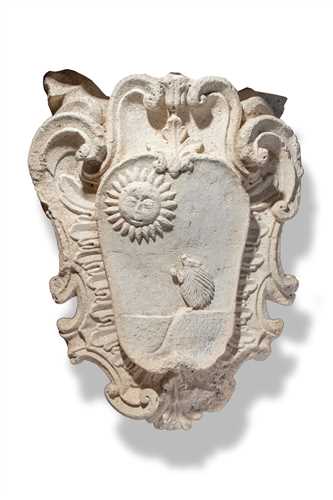 
Architectural: A rare carved limestone armorial from La Suvera, Siena, country villa of Pope Julius II and the Ricci family carved in high relief with a hedgehog gazing at the sun

Provenance: The Ricci family were established in Montepulciano, Southern Tuscany in the 12th century and owned La Suvera in 1123. Riccio de Ricci was an amateur weather forecaster, whose predictions were so accurate, he was believed to be a warlock engaged in the Dark Arts. To deflect the accusations, he claimed to make his predictions by observing the way hedgehogs scanned the sun. Since that time, the Ricci coat of Arms has incorporated a hedgehog gazing at the sun as in this rare Italian 18th century carved stone example. To this day the Italian for hedgehog is Riccio. This armorial which would have adorned another Ricci property was relocated to La Suvera following the repurchase of the villa by the Marquises Ricci who converted La Suvera to a Relais Hotel. Following its recent closure this and the marble baths were removed. See also footnote to lot 5.