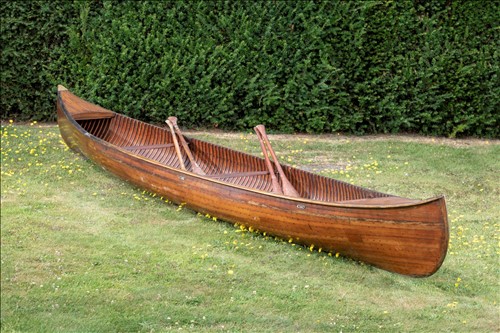 
Boats: A cedar strip canoe by the Lakefield Canoe Company

with two pairs of paddles and applied makers’ plaques

Lakefield Canoe was a Canadian canoe company established in 1858 in Lakefield, Ontario. One of the leading makers was Walter Walker, born 1907.

From 1937 to 1942, he built cedar-strip sail boats for George Cook at Sail-Craft in Lakefield. When that company closed as a result of the demands of war production, he found work with the Peterborough Canoe Company and spent the next 20 years there, from 1942 to 1961. In 1959, at the age of 52, he was appointed foreman, overseeing the work of 100 men in the factory.

As he had done many times before, driven by his passion to build boats, Walter moved on to Peel Marine in Lakefield where he built and repaired canoes until he retired in 1986. Many of the canoes Walker built at Peel Marine are treasured by their owners to this day; they are visible and distinctive at the various annual regattas in and around the Kawartha Lakes and farther afield.