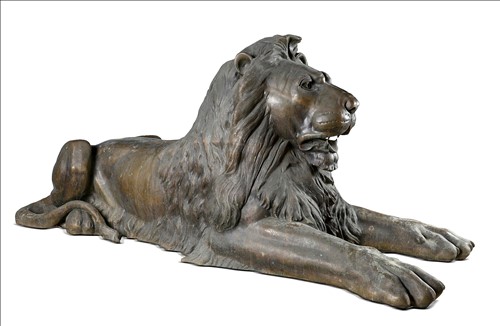 Sir Edwin Henry Landseer RA 1802 -1873 was an English painter and sculptor well known for his paintings of animals-particularly horses dogs and stags. However his best known works are the lion sculptures in Trafalgar Square.

Landseer's life was entwined with the Royal Academy. At the age of just 13 in 1815 he exhibited works there. He was elected an Associate at the age of 24 and an Academician five years later in 1831. He was knighted in 1850 and although elected President in 1866 he declined the invitation.

In 1858 the government commissioned Landseer to make four bronze lions for the base of Nelson's Column in Trafalgar Square following the rejection of a set in stone by Thomas Milnes. The lions were made at the Kensington studio of Carlo Marochetti who also cast them. Work was slowed by Landseer's ill health and his fractious relationship with Marochetti. The sculptures were installed in 1867 and have subsequently become one of the most popular and iconic sculptures in the country.

Provenance: Recently removed from the world famous Camden Lock Market in London. The lions were originally commissioned in the early 1990's as part of the redevelopment of the site the by architect John Dickinson.

Camden Lock Market is situated by the Regent's Canal on a site formerly occupied by warehouses and other premises associated with the canal. By the early 1970s the canal trade had ceased and in 1974 a temporary market was established. It is now the fourth-most popular visitor attraction in London attracting approximately 100000 people each weekend. Camden Lock market is now undergoing a major redevelopment resulting in a number of sculptures and furniture from it being sold through Summers Place Auctions with this monumental pair of lions being the most impressive.