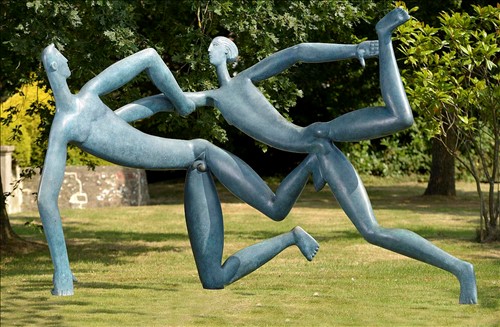 
•Sculpture: † John Buck In The Swim Bronze Signed John Buck 206cm.; 81ins high by 327cm.; 129ins wide by 152cm.; 60ins deepProvenance: Removed from The West Quay Centre Southampton during redevelopment.Born in 1951 Jon Buck studied at Nottingham and Manchester Art Schools. He was a Fellow in Sculpture at Cheltenham College of Art and the first Artist in Residence for Thamesdown Borough Council in 1983. He is a Member of the Royal West of England Academy and a Fellow of the Royal Society of British Sculptors.Buck has completed many public commissions including Embracing the Sea for Deal Kent Returning to Embrace for Canary Wharf in London In the Swim for West Quay Centre Southampton and Ship to Shore for Portishead Quays. His work is regularly exhibited both in UK and abroad and is held in many public and private collections.