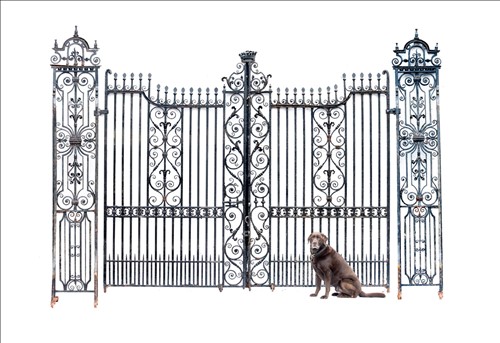 Provenance: Easton Lodge, Great Dunmow, Essex, England. It was one of many country houses destroyed during the 20th century. Part of the west wing (rebuilt as a separate house after a fire in 1918 for use as servants’ quarters) still stands; and the Grade II listed gardens designed by Harold Peto have been largely restored and opened to the public.

Most famous of those who lived at the house was Daisy Greville, Countess of Warwick, who was born Frances Evelyn Maynard at Easton Lodge in 1861 and inherited the estate when just four years old. She became a socialite and mistress to King Edward VII, and continued to live at Easton Lodge with her husband, the 5th Earl of Warwick after her marriage. As a result, the Lodge became famous for its society gatherings. Guests at Easton Lodge included George Bernard Shaw, Gustav Holst, Ramsay McDonald and HG Wells whose family lived in one of the estate properties. He, in turn, received visits from such notables as Dame Ellen Terry, AA Milne and Charlie Chaplin.

In 1918, another fire severely damaged the Jacobean wings of the house. The fire is thought to have been started by one of the Countess’ pet monkeys. Major portions of the Estate were auctioned in 1919/20 and outlying parts had already been sold in the 1890’s. The Jacobean wing of the house was rebuilt after this second fire, and the Countess, having been widowed in 1924, eventually moved into the West Wing where she remained with her beloved animals until her death in 1938.

In 1923, Daisy offered the whole estate to the Labour Party - they declined. She stood for Parliament as Labour candidate for Leamington & Warwick but lost out to Anthony Eden. Such was her commitment that in 1926 she then offered the entire estate to the TUC who were very keen to accept. Plans were made to develop Easton Lodge into a college and university but, after the General Strike in 1926 through which the TUC’s funds were severely depleted, the arrangement had to be abandoned as they were no longer able to finance such an institution.

During World War II the estate was requisitioned by the War Office, leading to the destruction of some 10,000 trees to enable the construction of RAF Great Dunmow (also known as RAF Little Easton) in the former park. The house was largely demolished following its return by the military in 1950.

After 30 years of abandonment the west wing was purchased in 1971 and is now used as a private house. The late 19th century stable cottages and a red brick water tower also remain, and are Grade II listed buildings.

The Gardens of Easton Lodge are the only example in East Anglia of the work of the Edwardian garden designer, Harold Peto. Peto originally trained as an architect and brought to Easton Lodge his passion for Italianate, French and Japanese designs, including many architectural features. Peto’s 1902 designs for the Countess of Warwick included formal lawns, a sunken Italian garden, a yew walk, a treehouse, a glade and a Japanese garden.

These impressive gates, which were the main in and out gates from the deer park to Easton Lodge, predate Peto’s involvement, but since they incorporate earl’s coronets and a ‘W’ for Warwick, for the 5th Earl of Warwick who moved into Easton Lodge following his marriage to Daisy Greville in 1881, they may have been part of an architectural scheme by the Scottish architect, William Young in 1884 most of which was never realised.

Caption to B&W pic; Easton Lodge, showing one of the open pairs of gates.