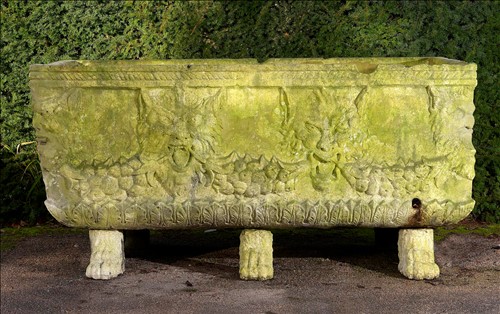 
Planter: A monumental and rare carved Travertine marble cistern Italian 16th/17th century on paw feet restorations 127cm high by 259cm long by 120cm deep In the 15th century Pope Nicholas V began the rebuilding of the Acque Vergine the ruined Roman aqueduct which had brought clean drinking water to the city from eight miles away. Water features subsequently became an important feature of Italian Renaissance villas and reached an apotheosis at the Villa d'Este (1550-1572) at Tivoli near Rome which featured a hillside of basins fountains and jets of water as well as a fountain which produced music by pouring water into a chamber forcing air into a series of flute-like pipes. Carved stone cisterns of this scale are extremely rare. The majority of antique carved stone or marble water features brought back from Italy are in the form of 16th-18th century wellheads usually from the Veneto area and carved in Istrian stone. The present example is also unusual in being carved on all four sides and would probably originally have stood in the centre of a palazzo courtyard rather than as a basin for a wall fountain. There are old fixing holes on the rim suggesting that it would originally have had some sort of wrought iron overthrow with a pulley system for water containers. Travertine stone was more commonly used as an architectural material from Roman times onwards and was used by Gian Lorenzo Bernini to build The Colonnade of St. Peter's Square in Rome in 1500. Michaelangelo also chose travertine as the material for the external ribs of the dome of St Peter's Basilica. Travertine derives its name from the former town known as Tibur in ancient Roman times. The ancient name for the stone was lapis tiburtinus meaning tibur stone which was gradually corrupted to travertine. Due to it's exceptionally hard nature it is seldom used as a material for sculpture carved in the round. The sculptor has compensated for this by carving impressive grotesque masks but in low relief in deference to the difficulty of the material. These are very similar to a bronze fountain mask of King Midas with asses ears at the Villa Cittadella near Lucca which could be a pointed reference to a rival Italian family such as the Medicis who were bankers.