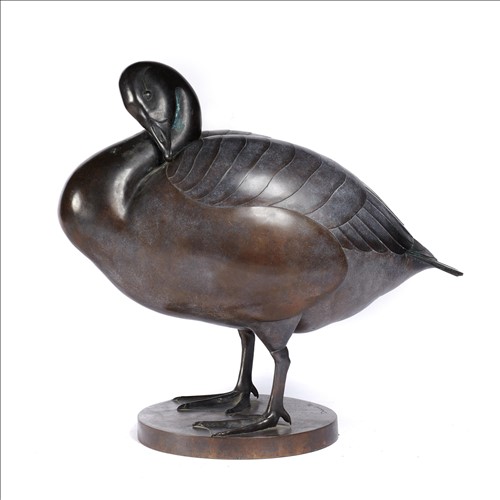 Signed and numbered 4 of 12

Geoffrey Dashwood was born in Hampshire, England in 1947. At the age of fifteen he won a scholarship to study fine art at Southampton College of Art, but left after a brief period, preferring to study directly from nature. In the 1980s Dashwood discovered a gift and a passion for sculpture. His earliest works were small, highly realistic studies in the mainstream of traditional English wildlife art and comparable in style to the famous 19th century French Animalier School of Sculpture. Although these early works brought him commercial success, he became increasingly dissatisfied with the constraints of realism and the lack of personal expression the genre afforded him.

Dashwood started to experiment with larger life-size and monumental works and began to eliminate all superfluous details, creating boldly modelled pieces. He refined his sculptures to attain smooth, tactile, pure forms, further enhanced in bronze by the application of coloured and multi-coloured patinas. In these sculptures he combined his own aesthetic ideals, establishing a distinctive style which is now internationally recognised as being quintessentially Dashwood.

Although his body of work can be classified within the wildlife art genre it is generally considered by many to transcend the subject matter and has also firmly established acceptance within the wider field of contemporary art. His affinity for and empathy with birds and his unique ability to express these emotions to others through his sculpture is undisputed. Dashwood’s work is exhibited and collected worldwide.