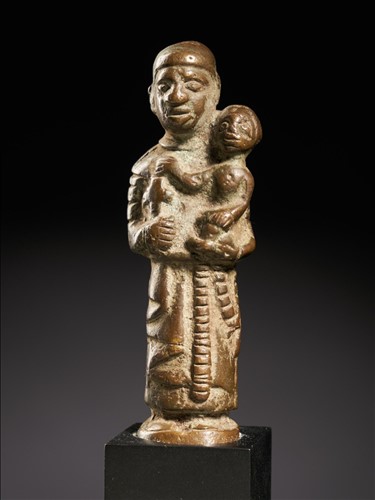 
Tribal/Ethnographic: Saint Anthony of Padua bronze pendant, Bakongo People, DRC, 1950s, 10cm high. ‘Catholic since the late fifteenth century, the Kongo Kingdom fostered devotion to many saints. St. Anthony was among the most popular, and was called Toni Malau ("Anthony of Good Fortune") for his purported powers of healing and good luck. The popularity of Saint Anthony in Kongo was part of an early modern phenomenon in which the saint was equally popular in Europe, South America, and Africa. Born in Lisbon, Portugal in 1195, the Franciscan brother Anthony was canonized just one year after his 1231 death in Padua, Italy. Claimed as a patron saint by both Portugal and Italy, religious missionaries from both regions spread his cult globally. Soon after their 1645 arrival in Kongo, Italian Capuchin fathers began to spread the cult of St. Anthony. In the Kongo kingdom, locally made figures of Saint Anthony based on European prototypes became common around the eighteenth century. The practice most likely related to the saints popularity in the kingdom, and was possibly tied to the short-lived Antonian movement, during which the Kongo noble woman Beatriz Kimpa Vita gained a significant political following after declaring herself the reincarnation of St. Anthony. To the chagrin of European missionaries, the Antoniens adopted the metal, ivory, and wooden images of St. Anthony, wearing the sculpture of the saint they called Toni Malau as a sign of their allegiance and as a protective amulet. Known as "Little Anthonies," her followers occupied the capital and travelled throughout the Kongo kingdom wearing their medallions, spreading the message of Dona Beatriz, who believed that Africanizing the church would strengthen the Kongo state, which was in disarray after a series of civil conflicts and the rising effects of the Transatlantic slave trade. While the Antonien movement was successfully put down in 1706, St. Anthony remained popular long after. Considered the "Saint of Good Fortune" or the "Saint of Prosperity," Toni Malau figures continued to be used prominently in Kongo as forms of protection from illness, the troubles of childbirth, or other problems.