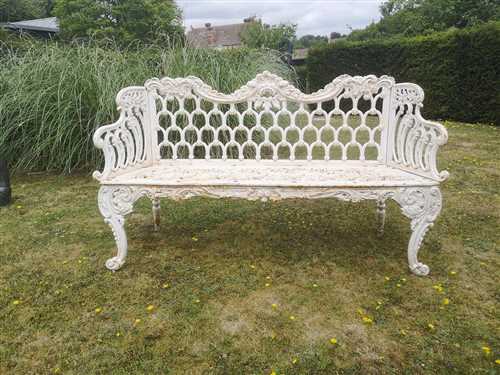 the back stamped Carron and with numerous diamond registration marks

The design for this seat, number 34358, was registered and patented by the Carron Foundry, Carron, Stirlingshire, on the 16th March 1846. The present larger version of this seat is considered very rare. (See engraving).

Founded by Dr John Roebuck, Samuel Garbett and William Cadell in 1759, the company initially concentrated on producing cannon in reaction to the decline of production in the Sussex Weald. In 1764 John Adam, brother of architect Robert, became a partner and the company started to produce more decorative designs. The company was involved with many significant projects including manufacturing the cylinders for James Watts first steam engine. In 1773 the Company was granted a Royal Charter and became a major supplier of cannon during the Napoleonic wars to the extent that the firm had its own fleet of armed ships to transport the cannon from Scotland to the Woolwich arsenal. By the mid 19th century the company had expanded the range to include garden seats, stick stands and fire grates.