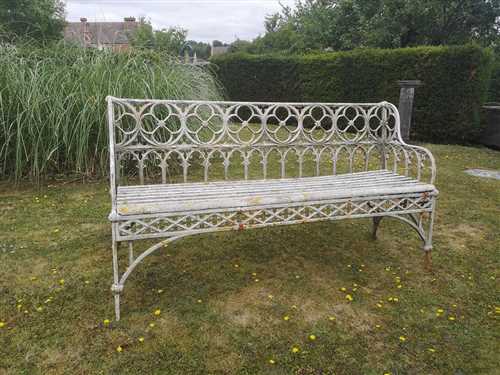 A similar seat is illustrated in the catalogue of the Societe Anonyme des Hauts-Fourneaux & du Val-D’Osne Fonderies circa 1900, Plate 229 number 1774 (see engraving). The firm of J.J. Ducel was started in 1810 at Poce in the Pas- de-Calais. One of the leading manufacturers specializing in architectural fittings as well as urns and statues. Following the death of Monsieur Ducel in 1878 the Val d’Osne foundry purchased the firm’s patterns. The output of cast iron in France at this time was enormous offering a huge range of architectural and decorative pieces which could be selected from lavishly illustrated catalogues. This seat is a much rarer example of the more well-known gothic style seat produced by the Val’Osne foundry. Unusually it bears the Ducel foundry stamp and in this instance the original hexagonal seat has been later replaced with wooden slats. The quality of construction is extremely high and incorporates very rare flowerhead cast nuts on the end supports of this seat.

Condition report
Original pierced geometric seat replaced along time ago with wooden slats; one back strut detached from back of seat rail, two reinforcing struts put on connecting apron and bowed stretcher along time ago for additional strength; two old welds on front of apron; overall nice old paint finish with rust showing through and overall nice antique condition with no other losses or major damages