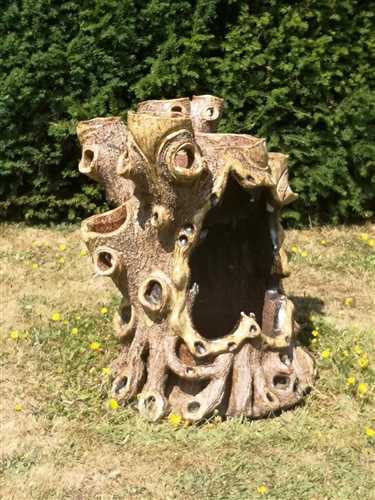 circa 1868 and attributed to W. Hudspith, South Tyne Works, Haltwhistle

During the latter half of the 19th century a passion for the rustic became fashionable in garden decoration. Foundries such as Coalbrookdale produced a wide range of cast iron seats in foliate styles such a lily of the valley and nasturtium. The return to nature was championed by the art critic John Ruskin who believed that all beauty in art came from nature. Ironically much of this was a reaction to the industrial revolution including the foundries and brickworks which produced such pieces. The firm of Hudspith primarily produced drainage pipes and bricks but in common with many mainly Scottish brick works they also produced a limited range of garden ornaments in fireclay including these rustic tree trunk planters primarily for display at exhibitions to advertise their more mundane wares. It is particularly rare for planters like this to be stamped. The diamond registration stamp and number indicates that this design was registered on 3rd June 1868 by W. Hudspith.