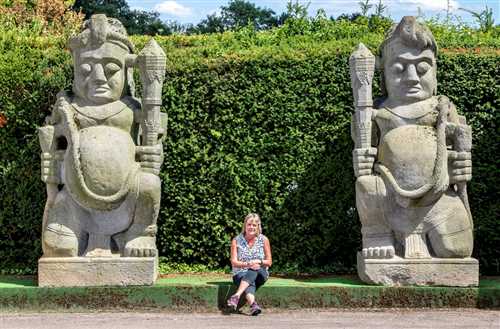 A Dvarapala is a door or gate guardian often portrayed as a warrior or fearsome giant, usually armed with a weapon - the most common being the gada (mace). The dvarapala statue is a widespread architectural element throughout Hindu, Buddhist and Jaina cultures, as well as in areas influenced by them like Java.

These statues were traditionally placed outside Buddhist or Hindu temples, as well as other structures like royal palaces, to protect the holy places inside. A dvarapala is usually portrayed as an armed fearsome guardian looking like a demon, but at the gates of Buddhist temples in Sri Lanka, dvarapalas often display average human features. In other instances, a fierce-looking nâga snake figure may perform the same function.

The sculptures in Java and Bali, usually carved from andesite, as with these massive examples, portray dvarapalas as fearsome giants with a rather bulky physique in semi kneeling position and holding a club. The largest dvarapala stone statue in Java, a dvarapala of the Singhasari period, is 3.7 meters tall which is only 50 centimetres larger than this monumental pair.