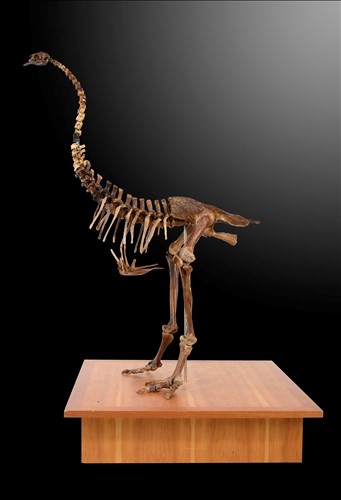 
Natural History: An articulated skeleton of a Moa

No articulated skeleton of a Moa has been offered for sale at auction in Britain since the 1930s and it is unlikely that one will be offered again. Several different kinds of Moa are recognized and this particular example comes from a bird that belongs to the genus Pachyornis. Rather like an Emu in overall shape these creatures dominated the New Zealand landscape until the coming of man around a thousand years ago.

The Moas of New Zealand are among the most famous of all extinct creatures. There were several different species ranging in size from birds the size of a swan to gigantic creatures that stood over 4 metres in height - the tallest birds known. The last of them are thought to have died out four or five hundred years ago, although there are rumours that some may have lingered on until the nineteenth century. Their bones occur in swamps and cave deposits on both of the main islands of New Zealand, but complete articulated skeletons are exceptionally rare, perhaps even unique, in private hands.