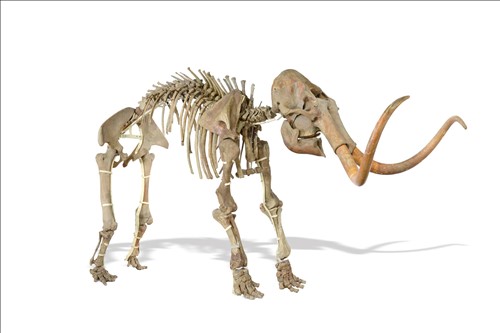 The Mammoth is one of the great icons of extinction. Perhaps only Tyrannosaurus rex, the Dodo, or a long-necked dinosaur can compare with its graphic power. Even the word ‘mammoth’ has now transcended its original meaning and is now a synonym for huge size, strength, or great value. Its image is so familiar, and even though it is very much a prehistoric animal, the species survived until comparatively recent times; in human terms its existence is almost close enough to touch.

Its bones are found across northern Europe and Asia from Siberia in the east to the UK in the west. Complete skeletons are rare although isolated teeth, bones and fragments of tusk are occasionally found. Sometimes such items are dredged up from the North Sea from areas that were once land.

Although its heyday was long ago, mammoths still survived in many places until 10,000 years ago. It is a little known fact that on remote islands in the Bering Straits mammoths lived on until around 2,000 years BC - which means that there were living mammoths at the time when the pyramids were being built!

In earlier times, herds of mammoths roamed over large areas of the world and fossilized fragments of bone or teeth are found in many places, but complete preserved skeletons are comparatively rare, and their preparation for museum exhibitions even rarer. This is for two main reasons; firstly the intrinsic rarity of such complete fossils and secondly, the great cost of digging out entire specimens from the deposits they have lain in for thousands of years together with the enormous amount of painstaking preparation that goes into readying the bones for exhibition.

On an autumn morning at the start of the 21st century, workers from a nearby construction site noticed that recent flooding had washed away tons of earth and sand close to the River Chulym in the Tomsk Region of Russia. The action of the water revealed something remarkable. The area was littered with bones - some of them very large - that had been preserved in ancient fluvial deposits. On investigation it was discovered that the bones belonged to mammoths that seemed to have died around 10,000 years ago in some kind of natural disaster. Certainly, there was no evidence that the hand of man had had anything to do with the deaths.

The bones of this adult male mammoth are in exceptionally good condition, and reveal that whatever disaster overtook it, it must have done so very quickly.