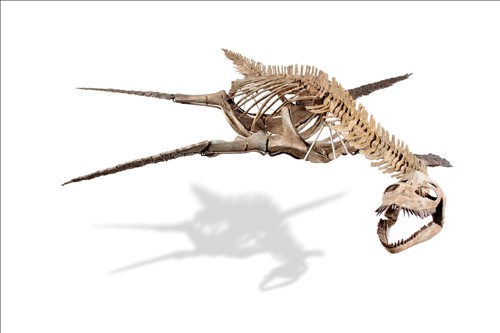 This specimen was found during construction of a building near Peterborough several decades ago. The finder noticed what appeared to be bone protruding from the side of a trench. He recovered what material he could before the trench was back filled. The skeleton which is 60% complete has subsequently been expertly and skilfully prepared and impressively mounted for display. The Oxford clay is now infrequently exposed and is usually excavated mechanically so very few remains are recovered making this specimen particularly rare. Fewer than eight, 3-dimensional Cryptoclidus plesiosaur skeletons are known to have been mounted for display and it is believed this is one of only 3 known British ones.