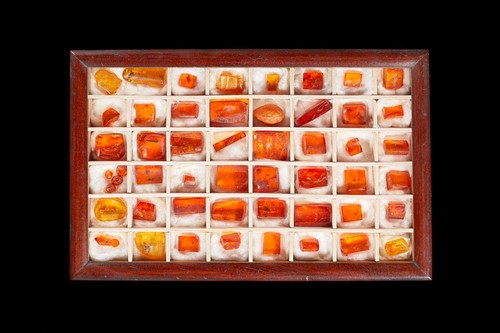 The Baltic region is home to the largest known deposit of amber, called Baltic amber or succinite. It dates from 44 million years ago (during the Eocene epoch). It has been estimated that these forests created more than 100,000 tons of amber.

Baltic Amber is fossilized resin. Although not a mineral, it is generally classified as a gemstone. A common misconception is that Amber is made of tree sap. Sap is the fluid that circulates through a plant’s vascular system, while resin is the semi-solid amorphous organic substance secreted in pockets and canals through epithelial cells of the tree.

Because it used to be soft and sticky, tree resin amber can sometimes contain insects as in the present collection in which every specimen contains an insect or insect part.

Provenance; This collection is reputed to have been formed by a Mr N.D Derbyshire in the late 19th/early 20th century. A photograph of him and his wife is included in the lot, together with a quantity of illustrated notes identifying the insects in each piece of amber which are numbered.