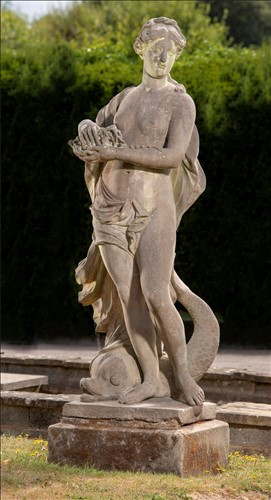 
Garden Statuary: Circle of Jan Pieter van Baurscheit: A rare carved gritstone figure of Venus, Low Countries, early 18th century on later stone plinth, 200cm high. Jan Pieter van Baurscheit was born at Wormersdolf near Bonn in 1669 and became a student of Peter Scheemakers in Antwerp. One of the most notable sculptors of the Low Countries, his work is well represented in the Rijksmuseum, Catalogue Nos 360-363. As well as working on a number of Antwerp churches, the majority of his work is classical in subject. He worked in marble as well as sandstone. He also worked with his son Pieter van Baurscheit the younger (1699-1768) who eventually became director of the Antwerp academy. They supplied garden sculpture to a number of patrons in the Netherlands and there are a few examples of their work in England, including a set of six marble vases carved with classical scenes at Waddesdon Manor built for Baron Ferdinand de Rothschild and now a National Trust property. Venus, the goddess of love, is represented in various guises. In this figure, the dolphin represents her birth from the sea, whilst the grapes she is holding represent "Sine Baccho et Ceres friget Venus" a quotation from the Roman comic dramatist Terence, implying that love grows cold without the stimulus of wine and feasting. This theme was especially popular in the 17th century with Flemish artists and sculptors, following Ruben’s treatment of it.