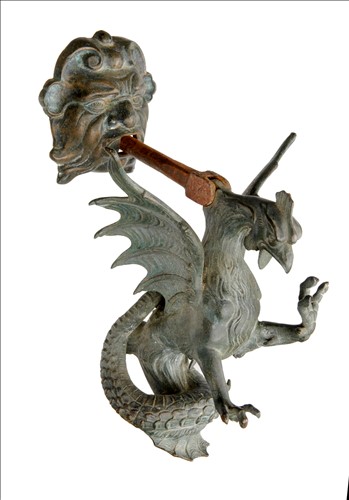 
Architectural: A rare bronze door knocker in the form of a Cockatrice by Anton Dominik Fernkorn

Anton Dominik Fernkorn (1813-1878) was born in Erfurt near Leipzig and studied sculpture under Johann Baptist Stiglmaier and Ludwig Michael Schwanthaler in Munich, from 1836 to 1840. His first sculptural project, “Saint George and the Dragon” for the courtyard of the Montenuovo palace, attracted attention, and the Austrian government appointed him director of the imperial bronze foundry at Vienna, in 1840, where he was part of the movement against the Neo-Classicism. He rediscovered Baroque sculpture and used it as the basis for his equestrian statue of Archduke Charles (1859), who had defeated Napoleon at the Battle of Aspern in 1809.

This unusual bronze door knocker, baroque in style, is virtually identical in modelling to a large scale cockatrice made for the medieval Trsat castle in modern day Croatia. (see picture)

This cockatrice, the so-called Dragon of Trsat, was a mythical creature cast in bronze that grew to become one of the best known symbols of the city. There are two, both commissioned by Austrian Field-Marshal and Count Laval Nugent who purchased the castle in the 19th century. A big history buff, Nugent, originally of Irish descent, was particularly keen on the legacy of the Frankopan, one of the leading noble families in Croatia from the 12th to the 17th century. As Trsat Castle used to belong to the Frankopan dynasty, Nugent was happy to acquire the edifice along with another similar estate, the Frankopan castle in Bosiljevo.

The cockatrices, by Anton Dominik Fernkorn were installed in front of the central object on the castle grounds, guarding the gate to what is now Nugent’s mausoleum.

For the Cathedral of Speyer, in 1858 he completed six of the eight free-stone statues of the German emperors buried there. He also made a statue of Prince Eugene of Savoy, but by unveiling in 1865 he was mentally ill and no longer able to work. He is well remembered for his portraits, and these include a bust of the Emperor Franz Joseph I of Austria and the funerary bust of Carl Ludwig Freiherr von Bruck in 1862. He was also a noted animalier, producing works such as the Lion of Aspern in Vienna. He died at the age of 65 in the hospital for mental patients in Saint Radengundu near Graz.