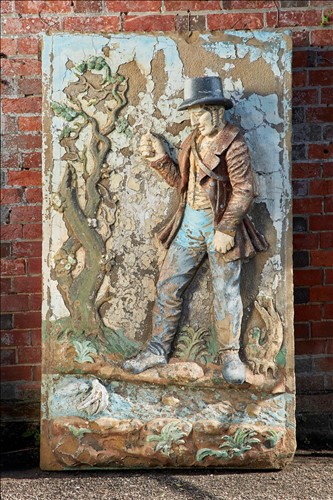 standing on the riverbank originally holding a fishing rod and net

By repute, this rare carved stone plaque is believed to have been set in the wall of a public house close to the home of Izaac Walton, who was an English writer, best known as the author of The Compleat Angler written in 1653, a pastoral discourse on the joys and stratagems of fishing that has been one of the most frequently reprinted books in English literature.

He also wrote a number of short biographies that have been collected under the title of Walton’s Lives. After the restoration of the monarchy in 1660, one of Walton’s Royalist friends, George Morley, was made bishop of Winchester and offered Walton residence in the bishop’s palace, where he stayed for the rest of his life and it is from a public house in the area that this plaque is reputed to have come from. His final personal revision (the fifth edition) of The Compleat Angler appeared in 1676 and included additional material written by his friend Charles Cotton.